Highlight |  Sergio Garcia for the Win on #18

Sergio Garcia for the Win on #18 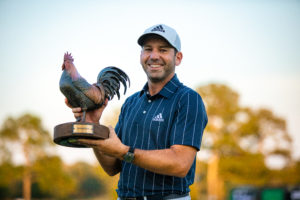 JACKSON, Miss. (October 4, 2020) – With eyes closed, Sergio Garcia putted his way to his 11th PGA TOUR win, and his 31st worldwide, at the 2020 Sanderson Farms Championship. This was Garcia’s first TOUR win since the 2017 Masters. The 40-year-old birdied the final hole to claim a one-shot victory over Peter Malnati, who himself is a former SFC champion, winning the tournament in 2015.

Garcia closed out the week at 5-under 67 at The Country Club of Jackson, where the Championship has been hosted for seven consecutive years. Finishing at 19-under 269, Garcia claimed a $1.188 million prize and 500 FedExCup points, moving him to #4 in the standings for the 2021 FedExCup.

“It’s obviously the perfect ending for an amazing week,” said Garcia. “I watched this tournament last year when my good friend Sebastian Munoz won and I thought, ‘That looks like a really nice course!’ This year, because of everything that happened, my schedule allowed me to play a few tournaments in the fall, so it was great to be here, to play the way I played, to believe in myself the way I did.”

“We couldn’t have scripted a more exciting finish to this year’s tournament,” said executive director Steve Jent. “To have Peter Malnati as a former champion post 18-under, and then have Sergio chase him down, was really fun to watch! And, based on the overall reviews I received from players and caddies this week, I’m really excited about the future!”

“We are delighted to have welcomed some of the best golfers in the world as we had a beautiful week in Mississippi,” said Joe F. Sanderson, Jr., Chief Executive Officer and Chairman of the Board of Sanderson Farms. This year has been challenging for many people across the world and though we missed having spectators on the course, we are pleased to have had a wonderful week of championship golf through unconventional circumstances. Sergio put on an extraordinary performance and we are thrilled to welcome him as our new champion. We look forward to welcoming everyone back in 2021 and hope to have the wonderful weather again next year.”

Earlier this year, and for the second year in a row, the Sanderson Farms Championship won the “Best Charity Integration” award by the PGA TOUR following the 2019 tournament. The award recognizes the PGA TOUR tournament that incorporates the tournament’s charity and theme into all facets of the event. The main benefactor is Friends of Children’s Hospital and the young patients at Batson Children’s Hospital, part of Children’s of Mississippi. The tournament also donates a portion of the proceeds to numerous additional charities arounds the state.

The total amount raised by the 2020 tournament will be announced later this year.

About The Sanderson Farms Championship
The Sanderson Farms Championship is an annual stop on the PGA TOUR hosted by Century Club Charities, a non-profit, 501(c)(3) organization whose mission is to promote the game of golf for the benefit of charity. The tournament’s primary beneficiary is Friends of Children’s Hospital. The tournament has been part of the PGA TOUR schedule since 1968 and is now in its 10th year as a part of the FedExCup. Sanderson Farms (NASDAQ:SAFM), the nation’s third largest poultry producer based in Laurel, Miss., is the title sponsor.

About Sanderson Farms, Inc.
Sanderson Farms, Inc., founded in 1947, is engaged in the production, processing, marketing and distribution of fresh and frozen chicken and other prepared food items. Employing more than 18,000 employees in operations spanning five states and 17 different cities, Sanderson Farms is the third largest poultry producer in the United States. As a company, Sanderson Farms is committed to adopting a fresh approach in everything they do, not only where products are concerned, but companywide as well. Though the company has grown in size, it still adheres to the same hometown values of honesty, integrity, and innovation that was established when the Sanderson family founded the company in 1947.