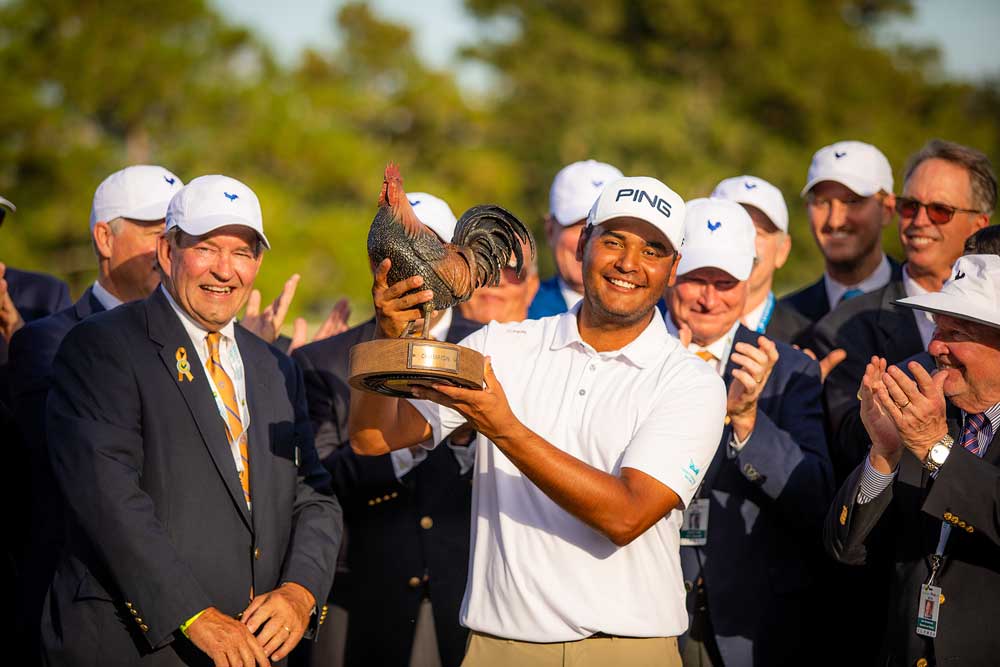 In an exciting playoff on the 18th hole, Sebastián Muñoz claimed his first PGA TOUR victory today at the Sanderson Farms Championship. Muñoz, a 26-year-old from Colombia, forced a playoff with a 15-foot birdie putt, and then beat Sungjae Im with a par on the first extra hole.

Muñoz closed out with a 2-under 70, making it back-to-back wins for South American golfers, following Joaquin Niemann’s victory last week at A Military Tribute at The Greenbrier. Muñoz, who played on the college team at North Texas, made the birdie putt to join Im at 18-under 270. With today’s Sanderson Farms Championship win, Muñoz claimed a $1.188 million prize, a 2020 Masters Tournament invitation, and 500 FedExCup points, giving him a jump on the season-long race for the FedExCup. Muñoz leads the FedExCup point race with 585.

“I’d like to thank the Sanderson family, and everyone who made this event possible,” said Muñoz. “I’m so thrilled to be here and to be the champion. I will always have a special connection to Jackson, Mississippi because this the first event I ever played as a PGA TOUR member back in 2016. Jackson is one of those places I will cherish, and I will always be grateful to this city.”

“We are thrilled to have another first time winner on the PGA TOUR,” said Executive Director Steve Jent. “We know Sebastian will be a great ambassador for our tournament and we are very excited about his career.”

The total amount raised by the 2019 tournament will be announced in the next few months.

2019 marked the 52nd year of Mississippi’s largest professional sporting event with over 32 hours of global primetime coverage on The Golf Channel and PGA TOUR Live reaching a potential 80 million viewers. The standalone event was the second of 49 events in the 2019-20 PGA TOUR season with a record total purse of $6.6 million. For the sixth consecutive year, The Country Club of Jackson has hosted the event, providing the golfers with a top-notch and challenging course.

“It was a great week here in Jackson for the tournament. We have enjoyed an incredible week of championship golf and are very excited to have Sebastian represent our tournament as the champion,” said Joe F. Sanderson, Jr., Chief Executive Officer and Chairman of the Board of Sanderson Farms. “The condition of the course was excellent, as good as we have ever had, and we couldn’t be more pleased with the field we had this year.”

Earlier today, the PGA TOUR announced that the 2020 Sanderson Farms Championship will be played October 1-4. “We are grateful to the PGA TOUR for giving us the early October dates for next year,” continued Sanderson. “October in Mississippi normally has more favorable and cooler weather conditions. The cooler weather tends to be better for the patrons, fans, golfers, and caddies.”

Earlier this year, the Sanderson Farms Championship won the “Best Charity Integration” award by the PGA TOUR after the 2018 tournament. The award recognizes the PGA TOUR tournament that incorporates the tournament’s charity and theme into all facets of the event. The main benefactor is Friends of Children’s Hospital and the young patients at Batson Children’s Hospital, part of Children’s of Mississippi. The tournament also donates a portion of the proceeds to numerous additional charities arounds the state. In addition to world-class golf, the tournament staff executed a number of events throughout the week, including two Pro-Ams, a popular Women’s Day Luncheon, All-Star and Youth Clinics, a Military Outpost, Kids’ Zone, and other events and activities throughout the week.

About Century Club Charities
Century Club Charities is a not-for-profit, tax-exempt 501 (c) 3 organization whose mission is to promote the game of golf for the benefit of Mississippi charities. Since 1994, Century Club Charities has served as the host organization for Mississippi’s PGA TOUR event, helping to raise over $15 million for statewide charities. The charitable impact of the 2018 Sanderson Farms Championship was over $2.25 million; including a record $1.25 million donation to Friends of Children’s Hospital for the benefit of Batson Children’s Hospital, part of Children’s of Mississippi.
About Sanderson Farms
Sanderson Farms, Inc., founded in 1947, is engaged in the production, processing, marketing and distribution of fresh and frozen chicken and other prepared food items. Employing more than 17,000 employees in operations spanning five states and 17 different cities, Sanderson Farms is the third largest poultry producer in the United States. As a company, Sanderson Farms is committed to adopting a fresh approach in everything they do, not only where products are concerned, but company-wide as well. Though the company has grown in size, it still adheres to the same hometown values of honesty, integrity, and innovation that was established when the Sanderson family founded the company.

Allen Exploration CEO and Wife Donate a Third $500,000 to Children’s of Mississippi’s...