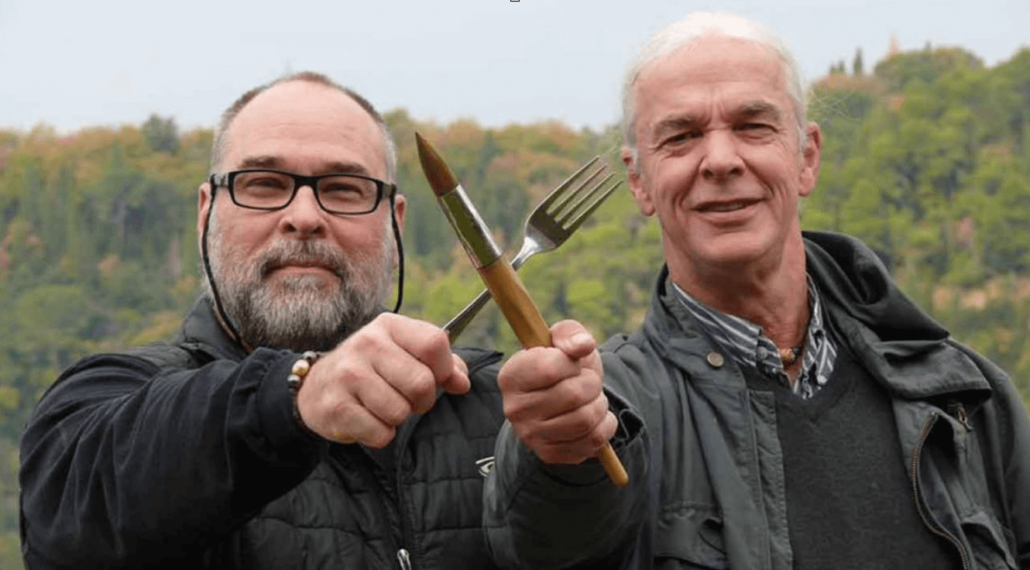 Tournament officials at the Sanderson Farms Championship are excited to announce the 2019 Women’s Day will have a different flavor this year, featuring a cooking and painting demonstration by Robert St. John and Wyatt Waters. The sixth annual Women’s Day luncheon will be held at The Country Club of Jackson on Tuesday, September 17. International Paper returns as presenting sponsor for the popular event.

“We wish to thank International Paper for their ongoing commitment in serving as the presenting sponsor for Women’s Day,” said Steve Jent, the tournament’s executive director. “Because of them, we are able to create an unparalleled experience for our attendees. We are truly grateful for their generous support over the last six years.”

“At International Paper, diversity and inclusion is about recognizing and appreciating the value of each unique individual and leveraging those differences to increase engagement. The Women in IP Mentoring Board is one way that International Paper brings together women to promote awareness, support development and encourage collaboration,” said Mandi Gilliland, Strategic Pricing and Customer Relationship Manager and Women in IP Mentoring Board Leader. “International Paper is proud to return as presenting sponsor of the Sanderson Farms Championship Women’s Day luncheon.”

Robert St. John, restaurateur, chef, syndicated columnist, and author has spent almost four decades in the restaurant business. Thirty of those years have been as the owner of the Purple Parrot, Crescent City Grill, Mahogany Bar, Branch, Tabella, Ed’s Burger Joint, The Midtowner, and Midtown Donut in Hattiesburg, MS.

St. John is the author of eleven books, including four collaborations with watercolorist Wyatt Waters. He has been featured in USA TODAY and appeared on The Food Network, The Travel Channel, National Public Radio, Martha Stewart Living, and the Turner South network.

“Wyatt and I are really looking forward to our dual demo at the Sanderson Farms Championship,” said St. John. “Joe Sanderson is one of our favorite Mississippians, and we love the association with Sanderson Farms, Inc. through Palate to Palette.” St. John is the creator, producer, and co-host of the Mississippi Public Broadcasting television series, Palate to Palette with Robert St. John and Wyatt Waters, which is in its fourth season.

“Even though neither of us plays golf, Wyatt and I both have a long and storied history with this tournament,” St. John continued. “Wyatt does an on-site painting of the tournament every year, and I was a caddy in the Pro-Am years ago when it was held in Hattiesburg. To have the chance all these years later to be a part of the event is very meaningful. We appreciate Joe and everything he does for Mississippi and our state’s various charitable causes.”

In 2009, St. John founded Extra Table, a non-profit organization that ships over 14 tons of healthy food to over 39 Mississippi soup kitchens and mission pantries every month.

Widely known for his watercolors of Southern culture, Wyatt Waters creates paintings of the roadside South. His works have been featured in Art & Antiques, American Artist, Watercolor, Mississippi Magazine and Delta Magazine. Wyatt’s paintings are held in private and corporate collections. He’s had solo shows at the Mississippi Museum of Art, the Lauren Rogers Museum of Art, the Meridian Museum of Art and the Jackson Municipal Gallery. He owns and operates the Wyatt Waters Gallery in Clinton, MS.

Wyatt has collaborated with chef, restaurateur and author, Robert St. John, on “A Southern Palate,” “Southern Seasons,” and “An Italian Palate.” He received the Mississippi Institute of Arts & Letters Award for “An Oxford Sketchbook,” and the Mississippi Library Association Special Award for Art for his collaboration with Robert St. John, “A Southern Palate.”

Additionally, Wyatt and his easel are a familiar sight at the Sanderson Farms Championship – as he is commissioned each year to produce a watercolor painting commemorating the tournament. “Each year, I look forward to painting a different hole for the tournament. It’s both an honor and a challenge to be a part of this Mississippi event that highlights the best of golf in the world,” stated Waters.

For more information regarding table purchases, please call the Championship office at (601) 898-4653 or email Erin Kiker at erin@sandersonfarmschampionship.com.

International Paper (NYSE: IP) is a leading global producer of renewable fiber-based packaging, pulp and paper products with manufacturing operations in North America, Latin America, Europe, North Africa, India and Russia. We produce corrugated packaging products that protect and promote goods, and enable world-wide commerce; pulp for diapers, tissue and other personal hygiene products that promote health and wellness; and papers that facilitate education and communication. We are headquartered in Memphis, Tenn., employ more than 52,000 colleagues and serve more than 25,000 customers in 150 countries. Net sales for 2018 were $23 billion. For more information about International Paper, our products and global citizenship efforts, please visit internationalpaper.com.

The Sanderson Farms Championship is an annual stop on the PGA TOUR hosted by Century Club Charities, a non-profit, 501(c)(3) organization whose mission is to promote the game of golf for the benefit of charity. The tournament’s primary beneficiary is Friends of Children’s Hospital. The tournament has been part of the PGA TOUR schedule since 1968 and is now in its ninth year as a part of the FedExCup. Sanderson Farms (NASDAQ:SAFM), the nation’s third largest poultry producer based in Laurel, Miss., is the title sponsor.

Sanderson Farms, Inc., founded in 1947, is engaged in the production, processing, marketing and distribution of fresh and frozen chicken and other prepared food items. Employing more than 15,000 employees in operations spanning five states and 17 different cities, Sanderson Farms is the third largest poultry producer in the United States. As a company, Sanderson Farms is committed to adopting a fresh approach in everything they do, not only where products are concerned, but company-wide as well. Though the company has grown in size, it still adheres to the same hometown values of honesty, integrity, and innovation that was established when the Sanderson family founded the company in 1947.