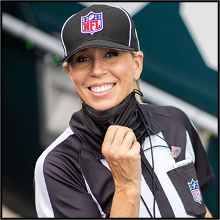 Tournament officials at the Sanderson Farms Championship are excited to announce that the 2022 Women’s Day promises be an action-packed day with keynote speaker – and one of the Sports Illustrated 100 most influential NFL figures of all time – Sarah Thomas. A Pascagoula, MS native, Sarah will share her story of how she became the first full-time female official in NFL history and how her history-making event has opened doors for other women to follow in her footsteps.

On April 8, 2015, Sarah Thomas was one of nine new game officials added to the NFL officiating roster for the 2015 season, becoming the first full-time female official in NFL history. Her history-making game happened on September 13, 2015 between Kansas City and Houston. Five years later, at the end of the 2020 season, Sarah once again shattered the glass ceiling as she was picked to officiate the Super Bowl LV in Tampa, Florida, making her the first female to ever work a Super Bowl. Her jerseys, hats, whistles, and flags from both of those game-changing events are on display at the Pro Football Hall of Fame.

The Women’s Day luncheon, in its eighth year, will be held at The Country Club of Jackson on Tuesday, September 27. International Paper returns as presenting sponsor for the popular event.

“We want to thank International Paper for once again serving as presenting sponsor for the Women’s Day luncheon,” said Steve Jent, the tournament’s executive director. “International Paper’s ongoing support has allowed us to continue shattering our own glass ceiling on what I am convinced is the best Women’s Day event on the PGA TOUR.”

“At International Paper, diversity and inclusion is about recognizing and appreciating the value of each unique individual and leveraging those differences to increase engagement. The Women in IP Mentoring Board is one way that International Paper brings together women to promote awareness, support development and encourage collaboration,” said Mandi Gilliland, Strategic Pricing and Customer Relationship Manager and Women in IP Mentoring Board Leader. “International Paper is proud to return as presenting sponsor of the Sanderson Farms Championship Women’s Day luncheon.”

Off the field, Sarah is a marketing specialist for Mid-South Rehab, Inc., a national speaker for Keppler Speakers Bureau, and a consultant for Rodan + Fields. Born in Pascagoula, Mississippi, Sarah is a University of Mobile graduate, where she earned a full scholarship as a basketball player with Academic All-American honors. Recognized nationally for her many accomplishments throughout her journey, the stand out is being named to Sports Illustrated’s 100 Most Influential NFL Figures of All Time.  However, to Sarah, nothing compares to the highest accolade of being mom to her three children, Bridley, Brady, and Bailey.

Sarah Thomas’ story is captured in the five-part documentary series Earnin’ It, which premiered on Peacock NBC in 2022, with a focus on the women in football who are paving the way for others to follow in the field. Sarah’s story also figures prominently in the wildly popular podcast of the same name, which also launched in 2022.

For more information on how to purchase a Women’s Day luncheon table, please call the Championship office at 601.898.4653 or email Erin Kiker at erin@sandersonfarmschampionship.com.